WESTCHASE – Social Media is taking over our world. But we already know that. Many teens these days are interacting with social media platforms, such as Snapchat, Instagram, Tik Tok and even the newly introduced app, VSCO.

What we don’t know is which one is most popular among teens. We know that Snapchat is one of the most popular apps among teens, where you can share photos and videos on your story as well as message with friends. But, Tik Tok and Instagram are very similar apps, and many teens are involved in one or both.

Tik Tok is an app for sharing 15 second video clips of the user making funny memes or sharing stories. It is not very popular for sharing photos like Instagram, but there are other reasons it is popular. You can follow, like, share, and comment on the user’s videos. Many trends such as Lottery (Renegade) dance and Zodiac Sign predictions are what makes Tik Tok so unique. But is it as popular as the OG Insta?

Instagram is an app that you can share photos and short videos. It is not as much as a meme app as Tik Tok is, but it has other ways of gaining popularity. You can like, reply, and repost on Instagram photos or stories, and apply filters to make your photo look more original. There are popular hashtags such as #instagood or #photooftheday. But is Tik Tok, the new app in town, going to take over Instagram’s reign?

I am here to debunk this mystery. I went around my school and asked some students which app they prefer, Tik Tok or Instagram. I got many responses with varying opinions.

(While you are reading this article, please keep in mind that I only interviewed twelve students, which is hardly the whole school. I did my best to get a variety of opinions around the school, but this data is just what I gathered.)

Some students love Tik Tok and expressing themselves through videos. One student I interviewed, Caroline B, was more interested in Tik Tok. She says, “I can express myself and it’s funny.” On Tik Tok, there are lots of memes expressed within each video put up. Funny videos that contain filters and sounds entertain many viewers. Anna B. also talks about the memes that you see on Tik Tok.

Another student, Sanjana K, says she likes Tik Tok because there is “a lot of original content.” Users of Tik Tok have the option to create a video up to 60 seconds with no prerecorded sound, so they can do story times or vlogs to add different variety to their channel. Another student at FMS says, “You can be creative and it’s fun to watch other’s ideas.”

One student says, “It helps you connect with people and it is generally fun.” Through this app, you can message your friends once you have both followed each other. This allows for an easier way to talk or send Tik Toks.

Some students, such as Reagan N, only have or mainly use one app. Others have many opinions about both apps and prefer one over the other based on the abilities of each app. Brina D says, “It allows users to produce videos and be creative, and you can create your own sounds. Instagram is mostly pictures.” Another student agrees, stating “It’s videos and not just pictures.” They feel that videos can be more of an entertainment and overall like Tik Tok better.

So far, Tik Tok has many supporting fans, but can Instagram change our minds?

Some students I interviewed voiced an opinion that stood for Instagram and its pictures. One student says they like Instagram because of the picture aspect to it. Abigail A. agrees, saying that she just prefers Instagram over Tik Tok. In some areas, Instagram may seem more developed because it has been around for 6 years longer than Tik Tok. It has different aspects that make it an interesting and unique app.

Another interviewee tells me, “I would pick Instagram because you can share your life… in photos, but Tik Tok… you make funny videos, and Instagram just shows… exactly what you’re doing, what your life is like.” Many people feel Instagram is more realistic than the former Musical.ly app, and that you are going to better connect with people over real photos than funny, and sometimes fictional videos. This can be true, and Instagram can be more of an app of expressing seriousness than Tik Tok is.

The last Instagram supporter says they like this app because “I can see what my friends have going on in their life and they might post about something I like, but Tik Tok is mostly funny videos and nothing that is really important.”

So, is the Insta supporter clan strong enough to break the new wave of Tik Tok meme videos?

So, judge, what’s the verdict? 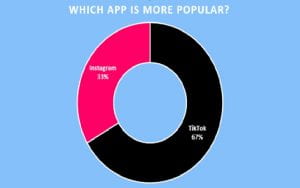 As we can see from this sample of students, Tik Tok is beginning to dominate. With a vote of 8 to 4, most students in this sample prefer Tik Tok over Instagram these days. As I claimed earlier, these are only twelve students out of about 1300 at FMS. If you prefer Tik Tok, have a blast making your vlogs and hilarious memes, while if you like Instagram better, have fun with the polls and awesome pictures. The one thing sure from this poll is that our school is pretty obsessed with the social media trends, and I speak for everyone when I say, we are so excited for the future of social media!!